Extra Innings will be produced by Ocean Parkway Productions and supported by the 36 years of experience of Simba Productions. Albert Dabah, owner of Simba Productions, will executive produce and direct Extra Innings, which he wrote based on his personal story of family loss, mental illness, and a love for the game of baseball. Long-time and award winning cinematographer, Ken Kelsch, is the Director of Photography and casting has recently commenced with Emmy-award winning Judy Henderson. For more information, please visit  http://www.extrainningsmovie.com.

The mission of SAVE is to prevent suicide through public awareness and education, reduce stigma and serve as a resource to those touched by suicide. With your help, we can affect change and save lives. We do not want to just fund a film, we want to spark a movement of hope. Discussing our tragedies openly helps to bring recognition to the widespread reach of suicide; to bring recognition to its effect on so many families and lives. Your support will help us save lives and prevent future tragedies. 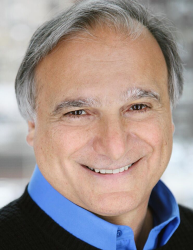 "Extra Innings is based off of true life events and my childhood. It pits family traditions against the dreams of youth, all entangled within the effects of schizophrenia, bipolar disorder, and depression. Along with entertaining people and telling a good story, the mission of this film is to help people open up a dialogue with each other and realize that even in the most trying circumstances, it is important to speak up and take action on behalf of those we love. I also hope that Extra Innings can touch the lives of others who have had experiences like my own. The focus on mental illness is seen through two characters in our film, based on the actual struggles and eventual suicides of my older brother and sister. We’ve sought to align ourselves with SAVE to help promote a deeper perspective on this often misunderstood struggle and to further our mission of awareness. Their message and work resonates deeply to my own story. In contributing to the film, a percentage will go directly to the foundation and is 100% tax deductible" - Albert Dabah

Contribute before August 15th and receive some of the perks below! 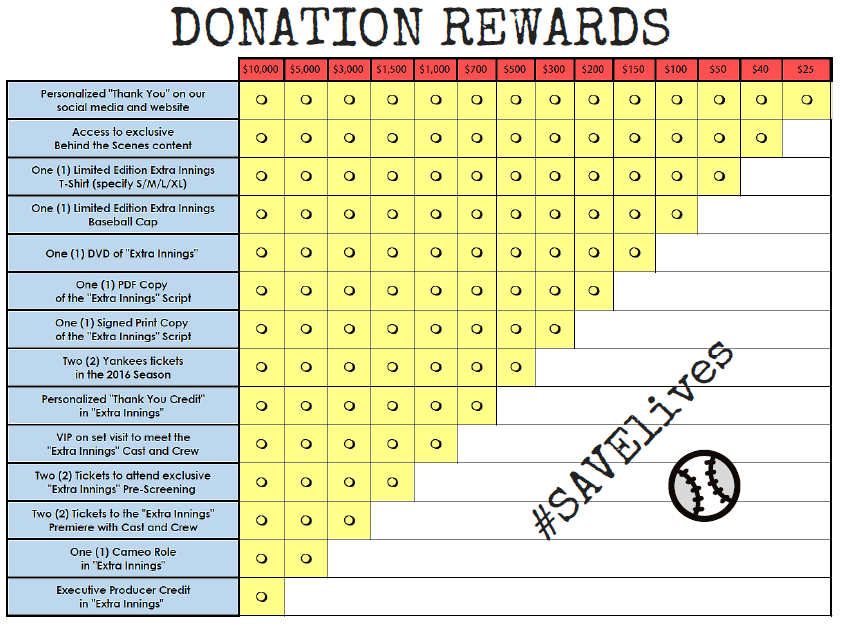 (Each level receives all perks before it!)

More about the team:

Writer & Director: Albert Dabah has been in the video and film production business for 36 years: directing and producing, as well as owning Video Portfolios and Simba Productions in New York City. Albert oversees company production and spearheads the creative meetings that are integral to Simba Production’s success. Albert’s background is in psychology, theater, and film. In his early twenties, he worked as a psychotherapist with adults and teenagers. His theater and film background (which include acting in off-Broadway theater productions, one-act-plays, and several film roles) led him into the world of film production. He has had the opportunity to work with notable directors and actors; including Martin Scorsese, Ron Howard, Steve Martin, Emma Watson, Susan Sarandon, Robin Williams, Ridley Scott, Meryl Streep, John Travolta, Diane Keaton, and Tom Cruise. As well, he has directed  short films and documentaries, most recently The Meeting and Bonnie Pride. Currently, he is producing and directing Extra Innings, a film he wrote based on his his youth and true life events. His years of experience in video and film production have provided him a wealth of knowledge. He uses his unique industry know-how to guide a team of talented and energetic writers, producers, cinematographers, sound technicians, and editors. He has done so for nearly four decades.

Casting Director: Judy Henderson has been honored by The Ross Reports as one of the top 20 Film Casting Directors in the United States. Her numerous accolades include an Emmy Award (Outstanding Casting in a Drama Series), Emmy nominations (Outstanding Casting in a Drama Series), and four Artios Awards. Judy has cast innumerable national on-camera and voice-over television commercials. She is a member of the Casting Society of America and Local 817 of the Teamsters Theatrical Union. Select film credits include Before Midnight, Paranormal 2, 12 and Holding, L.I.E. (sic Independent Spirit Award nominations, winner of Best Debut Performance Award), and Before Sunrise. Select television credits include Homeland (Emmy Award and 2 Artios Awards – Showtime Series), Love And Betrayal: The Mia Farrow Story (Fox), and Land of Little Rain (PBS). Broadway credits include Barefoot In The Park, and Anna Karenina (4 Tony Nominations). Off-Broadway credits include Invasion (Obie Award), Lie of The Mind (Artios Award), The Kid (5 Drama Desk Nominations), and Hurlyburly (Artios Award).

Director of Photography: Ken Kelsch finished his studies for his MFA at the prestigious NYU Tisch School of the Arts in 1977. He began one of the longest successful DP/Director collaborations in Cinema with, one of the last final cut Directors, Abel Ferrara.Ken has shot over 30 Feature Films, 100 plus hours of network Television, numerous MOWs and TV Events, along with his documentary experience and corporate projects including covering some dangerous topics for CNN Special Assignments. He has lived and worked on both coasts, as well as shooting in the Mid West. He has shot all formats: 35mm and 16mm, SD and HD, and has moved quickly into the Digital Realm. His lighting enticed with “Big Night” and revealed the seamy side of both “Bad Lieutenant” and “The Funeral.” He has worked, with great success, with prominent Actors and Directors to include, among others, John Landis, Joan Michlin Silver, Glenn Gordon Caron, HBO’s Tim Van Patten, Christopher Walken, Madonna, Harvey Keitel, Danny Glover, and Patricia Arquette.